Do you remember going to Grandma's house and in that one back room on the West side where all the junk was she had foil over that window? You might have even asked her why she did that. The truth is it worked for getting heat to stop pouring through that old window. Now to be honest it didn't look good from the inside or the outside but it did do the job of keeping heat out. 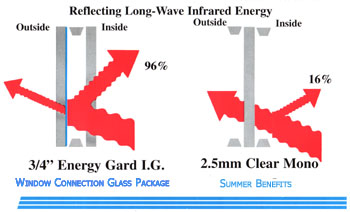 Modern technology capitolized on the concept. First with window tint when in was single paned windows, and later with Low E Glass. Quick disclosure here: Never put window tint on a double paned window unless you've made sure it is the kind that works in that application. Usually typical window film will cause a heat build up between the two panes of glass and cause seal failure, especially in West facing windows with high exposure. Sometimes window tint will blow the seals within a matter of months due to the heat build up between the panes. It actually melts the sealant that is supposed to keep moisture out from between the two panes of glass. Modern Low E is actually very thin sheets of metal poured at the time of the glass manufacturing and it is poured so thin that it's transparent.

In the winter, Low-E Glass is designed to work in two ways: First, it transmits the sun's shortwave energy. This means it allows the sun's energy (which provides visible light and invisible heat) in through the windows, which helps heat a home in winter.
Second, once the sun's heat is inside a home, the coating works to reduce the amount of heat transferred through the glass to the colder exterior. As a result, less of this heat, as well as the heat produced by a furnace, is transmitted back through the glass to the outside, helping to reduce heating bills in winter.

Back to the top